Friday, December 01, 2017
One of the most primary questions in the minds of a development startup, a beginner, is which language to use, and Okay, if I do have a language, which IDE to consider using with it? These are merely the questions, it goes down in the stack to understand more about different aspects of the IDE, such as,

And much more. All these key points are focused toward the development of a software engineer, as he gets to understand how to develop a vital piece of software. For the time being, I have just started out with Python development. Before you start asking me, why I did that:
Long story short, Python is a great language to learn and sometime fun when your C# or C++ code is no longer building. However, if you want to upgrade your skills to a professional Python developer, because Python developers also earn, the developer for Visual Studio Code Python extension was hired by Microsoft. Read the full story at Python Engineers team blog post on MSDN. And, Microsoft is still hiring more Python developers.

So that was for basics and introduction. Now the real stuff beings. Python can be programmed in so many ways, you can use your text editor and then do a simple python main.py, to execute the code. You can then extend the support to virtual environments and use other IDEs such as Spyder or interactive shells, IPython let's say. But for hardcore Python programming, you need something more than just a text-editor, Python interpreter and a linter.

PyCharm by IntelliJ and Visual Studio Code by Microsoft are the two primary IDEs that I keep using for Python development. Both IDEs support basic Python development, autocomplete suggestions, linters and extensibility of the IDE to support custom toolchains during development. I used Visual Studio Code a few months ago and I was let down, I admit. Then, I shifted my interests to PyCharm for a while. But, (as with anyone who has ever used PyCharm, IntelliJ IDEA, Android Studio or any similar IDE by IntelliJ; and yes I have not used the CLion, so I cannot say anything for it but data suggests it's no different) you know that PyCharm is a memory and CPU hog. I cannot afford my machine to go down even for a minute, thus it kept itching deep in my mind to change the IDE. I can afford to go to plain text editor if I have to, but I cannot afford my machine getting stuck. Anyways, that is when I started testing PyCharm vs. Visual Studio Code battles and in most cases Visual Studio Code won my heart again; I am talking about Visual Studio Code 1.18 (November Update) and the Python extension v.0.8.0 (9 November 2017).

So, in this post I am going to cover up a few things that would guide you in better selection of an IDE —  in no way I mean to make any personal or biased statement, I will only share what I feel like.

In the performance part, I can straight away suggest that Visual Studio Code is a winner, but that won't work out quite well. Visual Studio Code is an extremely lightweight IDE, whereas PyCharm has somewhat backend services and modules that are needed to load before the IDE can start. They can be given the benefit of the doubt, but one can easily ask for the benefits of a long load time.

On average, PyCharm has been reported to have extremely slow load time. Visual Studio Code on the other hand is really fast, and loads in less time. The modular approach of Code helps it in the performance race. Moreover, since Visual Studio Code depends heavily on extensions and add-ons, the projects and other libraries do not get loaded until they are needed to be loaded for the developers.

TypeScript, Python, Java and other similar libraries load as needed. Such as, when you open a file with type for Java program, your Red Hat Java extension will kick in. Same case for C# or Python files. This gives Visual Studio Code a good ranking when it comes to performance. Lastly, the delay in rest would be a fault of the extension and how it works.

If you still want to consider PyCharm for development: You are more than welcome, however this post would help you even improve the load time of PyCharm by converting it to Power Save mode and to load less amount of resources at the startup.

I am not saying, only Visual Studio Code has extensions, PyCharm and almost every other IDE has some ways to extend the functionality beyond the "compile and run". The marketplace for both of the IDEs support quite a plethora of extensions to bring more features and services.
Both the communities have a good support available. But in this case, since Visual Studio Code is a modular IDE, it can be converted to a full-featured IDE for any framework/platform/language. Whereas PyCharm is tailored solution for Python developers, and you might be needed to download and setup other IDEs such as IntelliJ for Java, and CLion for C/C++ programming.

Visual Studio Code, only needs to know what type of project you are currently in and will enable those plugins making it an IDE for that project. Sounds good, right?

This is an interesting portion. In Python, virtual environments play a huge amount of role in the overall development of libraries and experiments. I am not going to dig deeper in the concepts of virtual environment, merely suggest that you need to learn some basics of Anaconda or other virtual environment creation tool for Python projects.

Now, the main concept in the virtual environments is to select a different interpreter and then target that one for the current project. Unlike other installations, such as for C++ compilers or C# build systems, this is a great feature for developers targeting different projects, where a different version of Python or Python packages is needed. Anyways, the following are the steps taken in both the IDEs to work around with the virtual environments,

Starting with Visual Studio Code, the IDE supports the CTRL + SHIFT + P hotkeys to configure the properties and bring out most common settings and tasks pane for you. There you can select the "Python Interpreter" and then select the interpreter that you want to select.

Now, notice here, in PyCharm, on the other hand the process is somehow same, you can add the virtual environments and set their interpreters as the default. The main problem with these environments is that they are mainly slow. A lot slow. You get same time delays in both the IDEs whcih is mainly due to the interpreter, Visual Studio Code and PyCharm -- so they both do not win, nor lose. For instance, have a look here, 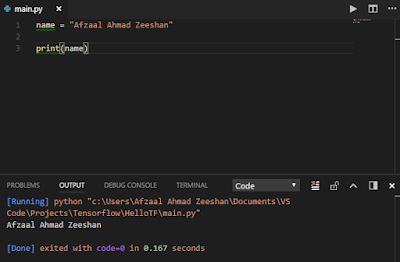 This simple task took this much time, however executing the same command with Anaconda's Python 3.6, takes the time down to almost 0.08 seconds. But that is a different story in itself. In this case, I would recommend not switching the IDE but the interpreter or the source code which makes the run take more time.

Lastly, you need to double check whether an IDE would be suitable to run on your machine or not. Such as, when you want to build an Android app, you are scared of what Android Studio would do to your machine, aren't you?

Same is the case here, the IDEs at hand, should be soft at our machines otherwise they will become a pain at the development themselves.

Likewise, the programs both although serve the same purpose and as seen in the image above, they both have the same amount of projects open. They are both utilizing the CPU and RAM differently. Now it can be debated that PyCharm provides more services, such as context analysis, code analysis and other suggestions. But Visual Studio Code's Python extension is also smart enough and in many ways faster to provide intellisense and the overview of what a function/object is about.

In my own opinion, Visual Studio Code is a winner in resource management. IntelliJ is really bad at producing the IDE with better resource management; Android Studio, IntelliJ IDEA are just a few of such examples. Providing context analysis, is not an excuse for overuse of the memory and CPU.

This is where, we will differ in almost every sentence. Both the IDEs have great number of extensions that can be installed, and both offer support -- Visual Studio Code has a community, working out on documentation, improvements and more.

In Visual Studio Code, you have to manage everything, this can be a benefit as well as a downside. For instance, if you are novice developer, then you are in for a surprise. You will have to install and setup a complete toolchain of the development. This stuff, is also not managed in IntelliJ, you have to setup a run/build configuration. So, again Visual Studio Code is better.

Lastly, the only other thing to notice is, what you Boss wants you to do. I am the boss of myself, so I go with Visual Studio Code, you might have to do what your Prynce Charming has to suggest. :-)

Popular posts from this blog

Microsoft recently introduced, Azure Cosmos Db accounts in their Build 2017. Who doesn't like a successful Build , and personally saying there were so many excellent announcements made at Build, that it has been intriguing almost everyone to know more about the products Microsoft is offering now. Among them is the Azure Cosmos Db. So, in this post I will give a million-feet overview, that you can read in under 5 minutes to fully understand what Azure Cosmos Db is all about. What is Azure Cosmos Db First thing to understand is that, Azure Cosmos Db is a wrapper around all the models that developers are using currently. Following are only a few of the models implemented by developers all across the globe,  Relational models -- the SQL databases. NoSQL models -- Azure already has a NoSQL model, DocumentDB.  Key-value pairs -- Typically apart from NoSQL, Key-value pairs are highly used for data interchanging; such as in JSON documents.  Graph etc -- Gremlin was mentioned to
Read more

Setting Up a MongoDB Server on Alibaba Cloud

Since the early days of NoSQL, many database engines have been developed but MongoDB is no doubt one of the pioneers in the scalable, fault-tolerant NoSQL database. MongoDB itself is document-oriented, meaning you store the documents, not objects and entities. And this the core concept of the NoSQL databases, you don't manage the relations between the entities, rather, you store them with them. It's like, instead of assembling Lego pieces as needed and returning them back to their own blocks, you prepare a complete object, and then store it in the box—saves time each time you have to show what you built. This is something that happens when we are trying to store the objects (the documents!), and data inside the MongoDB server. MongoDB internally takes care of several concepts for us, such as (but not limited to) sharding, replication, indexing and much more of similar operational management services. Recently, I stumbled upon Alibaba Cloud services for databases, their Apsa
Read more

Afzaal Ahmad Zeeshan
I teach those, who teach you.