Sunday, May 14, 2017
Microsoft recently introduced, Azure Cosmos Db accounts in their Build 2017. Who doesn't like a successful Build, and personally saying there were so many excellent announcements made at Build, that it has been intriguing almost everyone to know more about the products Microsoft is offering now. Among them is the Azure Cosmos Db. So, in this post I will give a million-feet overview, that you can read in under 5 minutes to fully understand what Azure Cosmos Db is all about.


What is Azure Cosmos Db

First thing to understand is that, Azure Cosmos Db is a wrapper around all the models that developers are using currently. Following are only a few of the models implemented by developers all across the globe, 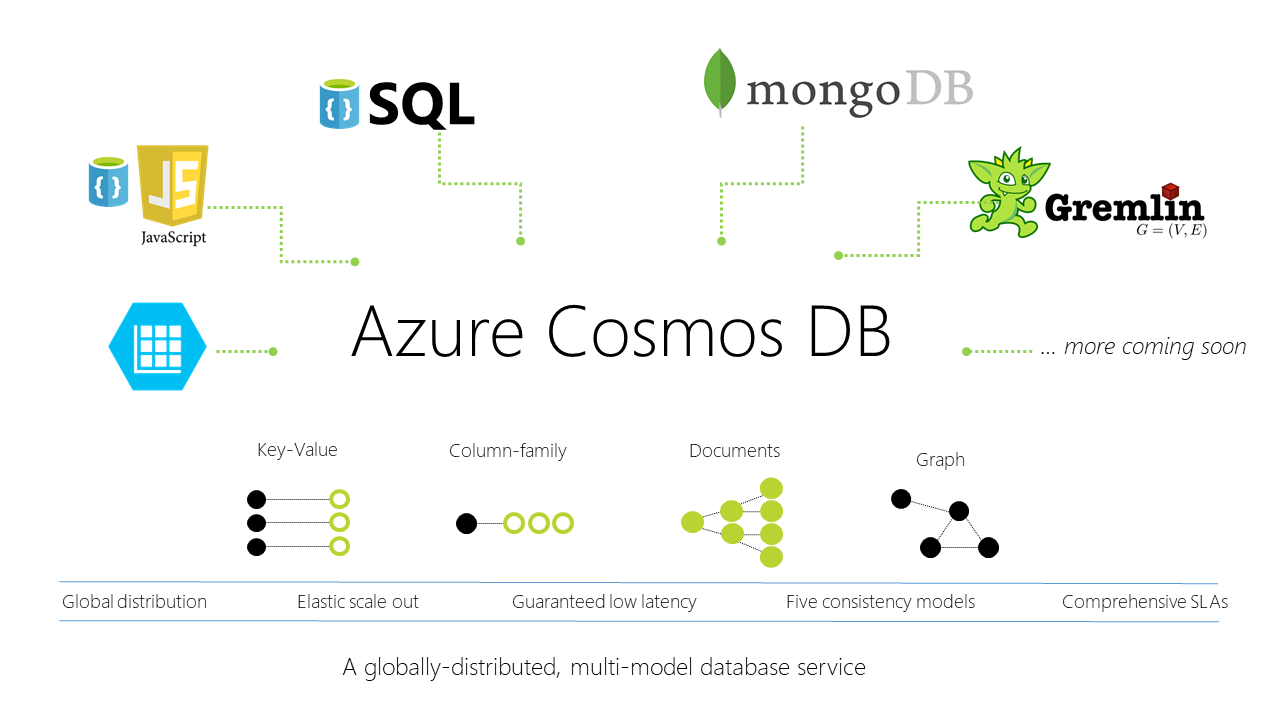 Likewise, the API models that it supports depends on the database model used, and the APIs that are provided at the time.

Microsoft Azure has been known for supporting multi-programming-language APIs, unlike the competition, who support only a few — and most of them rule out .NET for no fair reason at all.

However, in the case here, Azure Cosmos Db support the best possible solution for each of the model here. There are several benefits for this,
I will write about the programming part of this service in a later post, on CodeProject and C# Corner soon.

Until then, you may wish to get started from Azure Cosmos DB Documentation.

While the selection of Cosmos Db for your own projects, is all your own decision to be made. I will share a few of my experiences that I have had previously while trying it out. Note that, I just tried the service, I didn't build anything to try it out for my project.
Finally, it all boils down to managing the database model perfectly. It is your own duty to decide what you want to build, how you want to build and then create an account for that under Cosmos Db and get benefits such as planet-scale, multi-model database services.
azure cosmos db azure documentdb microsoft cloud services nosql
Location: Rabwah, Pakistan

Popular posts from this blog

One of the most primary questions in the minds of a development startup, a beginner, is which language to use, and Okay, if I do have a language, which IDE to consider using with it? These are merely the questions, it goes down in the stack to understand more about different aspects of the IDE, such as, Productivity Performance Extensions and Add-ons Ease of use Learning scope And much more. All these key points are focused toward the development of a software engineer, as he gets to understand how to develop a vital piece of software. For the time being, I have just started out with Python development. Before you start asking me, why I did that:  Python is amazing. Python is being used for many machine learning libraries. Python is portable (just like .NET Core, which is my first love) Scripting is sometimes fun with Python (as compared to bash, command prompt or PowerShell) Open Source software love Python (Blender, GIMP, TensorFlow, etc. etc. etc.).  Long story s
Read more

Setting Up a MongoDB Server on Alibaba Cloud

Since the early days of NoSQL, many database engines have been developed but MongoDB is no doubt one of the pioneers in the scalable, fault-tolerant NoSQL database. MongoDB itself is document-oriented, meaning you store the documents, not objects and entities. And this the core concept of the NoSQL databases, you don't manage the relations between the entities, rather, you store them with them. It's like, instead of assembling Lego pieces as needed and returning them back to their own blocks, you prepare a complete object, and then store it in the box—saves time each time you have to show what you built. This is something that happens when we are trying to store the objects (the documents!), and data inside the MongoDB server. MongoDB internally takes care of several concepts for us, such as (but not limited to) sharding, replication, indexing and much more of similar operational management services. Recently, I stumbled upon Alibaba Cloud services for databases, their Apsa
Read more

Afzaal Ahmad Zeeshan
I teach those, who teach you.